Eurofleets+ data management aims ultimately at publishing the metadata and data sets as collected by scientific teams during all the Eurofleets+ TNA cruises. This publishing is done through the EVIOR portal (European Virtual Infrastructure in Ocean Research) – integrated into the Eurofleets+ Website, and towards the larger community through inclusion in SeaDataNet and EMODnet portals and in a F.A.I.R. way. Therefore, the data management (DM) is deployed in synergy with SeaDataNet and its European network of NODCs. Scientific cruise teams formulate cruise DM plans for review by SDN NODCs (HCMR, OGS, and RBINS), who coach each scientific team before, during, and after TA cruises. They arrange later validation and archival of cruise data sets by NODCs for long term steward­ship, and publishing. Scientific teams can make use of EMODnet Ingestion for transfer of processed cruise data sets to the NODCs. 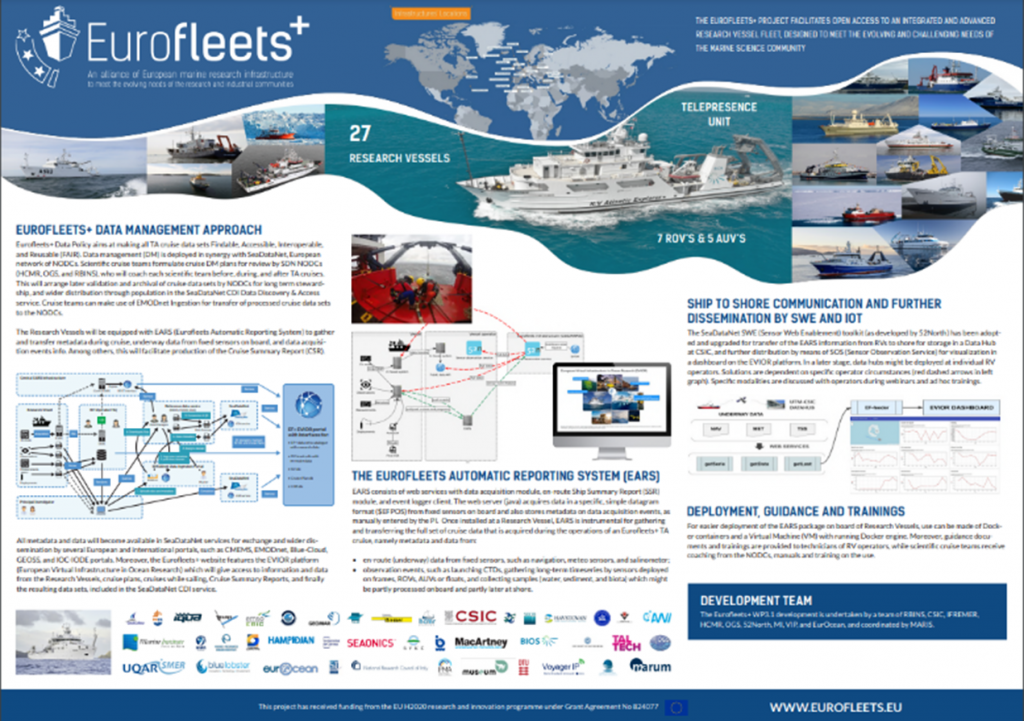 The Research Vessels are being equipped with EARS (Eurofleets Automatic Reporting System) to gather and transfer metadata during cruise, underway data from fixed sensors on board, and data acquisition events info. Among others, this facilitates production of the Cruise Summary Reports (CSR) which are published and made available at EVIOR soon after the cruises.  The advanced version of the shipboard data management system has successively been piloted on board selected research vessels, and rolled out across the fleet to supported Eurofleets+ funded TNA. The functionalities of the EVIOR portal continue to be reviewed, improved and expanded, including providing researchers in a later project stage with unique cloud computing and analytical technologies for interacting with the collected research vessel metadata and data.

The SeaDataNet SWE (Sensor Web Enablement) toolkit (as developed by 52North) has been adopted and upgraded for transfer of the EARS information from RVs to shore for storage in a Data Hub at CSIC, and further distribution by means of SOS (Sensor Observation Service) for visualization in a dashboard on the EVIOR platform. This facilitates the transfer of cruise metadata and underway observation data from the EARS equipped research vessels to the shore while sailing.  The dashboard (http://eurofleets.utm.csic.es/) is integrated in EVIOR and running with data streams from several research vessels. The following image gives an illustration.

To date, the SeaDataNet CDI metadata format for describing observation data sets use was made of the L05 vocabulary to indicate the device categories (class of instruments) used for acquiring the observations. As part of the ENVRI-FAIR project, aiming at making data management services more FAIR, an expansion was made to be able to include also the specific type of instruments, such as e.g. Sea-Bird SBE 21. In this way, there is additional information available for making a better judgement on the quality of the data, useful for data centres performing QA-QC on the data, and for end-users. This expansion is done by adding the option for terms from the L22 vocabulary (Device Catalogue). The information for the CDI can be retrieved from the SensorML records that are being used as part of the SWE toolkit and this opens opportunities for Eurofleets+ as part of the EARS module to carry also the types of instruments as used on the research vessels.

There is a requirement to shorten the time period between data acquisition and data access for users on research vessels and on shore, as well as for interacting with crew and vessels from the shore. The ability to directly communicate from the shore with the ship, its crew, and its data acquisition operations, while sometimes at the other end of the world, will facilitate optimising the scientific output of these costly operations and the logistic support, where needed. Industry partner Voyager IP, specialists in maritime satellite and communications technologies have developed Guidelines for control and optimisation of hard/software which leverages existing technology to deliver a pooled solution for flexible data communications in a more effective and efficient manner.