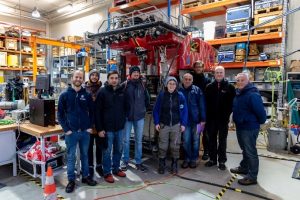 The first of two planned ROV Lab courses took place from the 19th-21st of November 2019. 11 applications were received and 7 participants from Greece, Germany and Sweden were considered as suitable and invited. As the course was designed for 8 people, a MARUM member was invited to fill the last open place. The participants received a training lesson in using a 7-function manipulator and a scientific dive in a virtual “Black Smoker ventfield” environment was carried out in the QuestSIM simulator. During three Class Workshops, the students were shown how to prepare a cruise, what needs to be considered during the mobilisation of a ROV -System on a vessel and last but not least, the operation of ROVs at sea. Unfortunately, the planned dive with ROV-Squid in the Test-Tank was cancelled due to a broken slipring of the ROV-winch. We received very positive feedback and will improve on structure and content of the course.