I had the great opportunity of joining the EurofleetsPlus Benchmark cruise, focusing on benthic habitat mapping in the Denmark Strait (1-10 August 2021).
As an engineer, I’m working at the Marine Robotics Center of the Flanders Marine Institute (VLIZ), where I deal with our ROV and other robotics. As I just started in this field, the opportunity to join this Eurofleets cruise with very experienced ROV technicians and pilots was the perfect fit for me.
The research took place from the G.O. Sars, a Norwegian research vessel, in the Denmark Strait, a sea strait between Iceland and Greenland. The ship was very comfortable, with a friendly crew, great food and most of all a nice group of scientists and ROV technicians.

The benthic habitat mapping was performed with an ROV from NORMAR, the Norwegian marine robotics department connected to the University of Bergen. The ROV was so big that it was hard to take a picture of it, unless it was almost in the water. Here are two pictures for scale. The first one showing only the ROV, the second one the ROV with its tether management system, as it goes underwater. 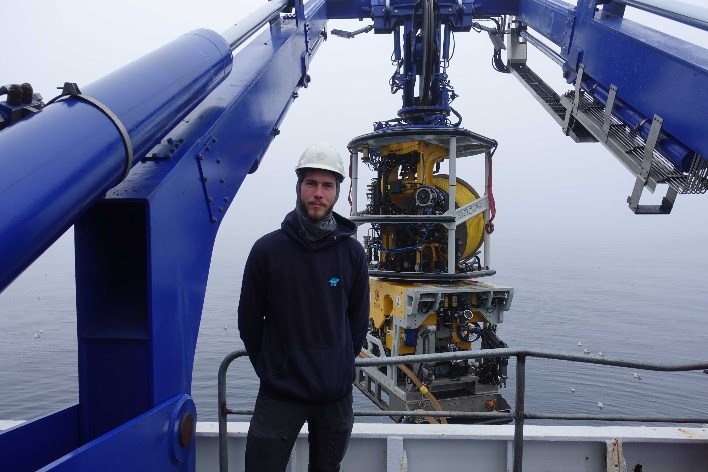 The sea was extremely calm for this part of the oceans. The lack of wind did mean that there was a lot of
fog and most of the 10 days at sea there was plenty of fog and we could not see any sun. A very good trade-off considering no one got sea sick and the cruise went very smooth.
The initially planned 21 dives were completed on day 7 or 8, which allowed us to do 7 more. Dive depths varied between 400 and 1800 m. Seeing the life at such depths was intriguing, and the fact that the dive was live broadcasted on every TV screen on the ship made it enjoyable for everyone on board.
Before each dive, a CTD was cast and a multibeam grid was sailed, to identify areas of interest for the ROV dives.
Each dive, we ran a transect over the seafloor, stopping at interesting locations for a closer look or taking samples with the manipulator or suction sampler. After following the ROV crew around on deck and in the pilot room, I got the chance to copilot and control the manipulator myself. On one of the last dives I even got to pilot, following a fish as a way of training my maneuvering skills.

During the cruise, we had to do some minor maintenance, which taught me a lot. On the last day of the cruise, following the ROV crew during the demobilization was very insightful as well.
All in all, this cruise provided me with a kickstart in ROV engineering and an amazing experience aboard the G.O. SARS.
I would like to thank Eurofleets for this opportunity, the ROV crew for their knowledge transfer and the cruise and ROV leaders for their welcoming spirit.
Roeland Develter, Marine Robotics Center, Flanders Marine Institute