The first Eurofleets+ funded research cruise for 2021 concluded last weekend when the Marine Institute’s Research Vessel Celtic Explorer returned to Port of Galway after a very successful three weeks of  work in the North Atlantic.  The “PORO-CLIM” Expedition comprised scientists and technicians from eight countries led by Dr Stephen Jones, University of Birmingham, and aimed to investigate how Earth’s deep interior has affected global climate in the geological past. 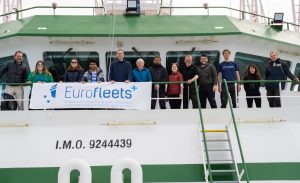 Large Igneous Provinces (LIPs) are huge outpourings of lava accompanied by voluminous release of greenhouse gases to the atmosphere.  LIPs are known to coincide with some of the most remarkable global climate changes and mass extinctions in Earth’s history.  The PORO-CLIM team of researchers is investigating whether the nearest LIP to Ireland, the North Atlantic LIP, which comprises ancient volcanic eruptions from Giant’s Causeway to western Greenland, could have driven a natural global climate change event that is the closest deep-time analogue of anthropogenic environmental change (though the modern change is happening much faster).  In order to answer this question, the team set off to obtain accurate measurements of the thickness of Earth’s crust along two tracks in the North Atlantic ocean, to the west of Ireland and Britain.

Dr Stephen Jones, expedition Chief Scientist, said that thanks to the hard work and dedication of all involved onshore and at sea, we have made a success of the first EuroFleets+ research cruise in the face of challenging global circumstances.

The expedition team embarked in Galway on 5th May after a Covid-safe mobilization process lasting almost three weeks.  Despite experiencing some challenging weather, the expedition successfully deployed a total of 47 ocean bottom seismometers (OBSs), acquired 800 km of seismic reflection data and coincident magnetometer data, and deployed 65 expendable bathythermograph (XBT) probes which measure the sea temperature as deep as 2000 metres. 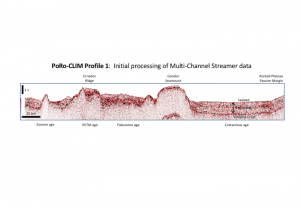 By measuring the thickness and age of oceanic crust around the little-explored Erriador Ridge, the team can reconstruct volcanic production throughout the Paleocene/Eocene Thermal Maximum, the natural global climate change event that is the closest deep-time analogue of anthropogenic environmental change. Additionally, the scientists measured the structure of the crust from the edge of the Irish Shelf to the mouth of the Porcupine Seabight, where they we will be able to document the process of continental break-up when volcanic production is limited.

Aodhan Fitzgerald Eurofleets+ project Coordinator said that the “PORO-CLIM” expedition, which leveraged funding from several sources, is a great example of how national and international research programmes can work together to enable essential research into Climate Change so that we can better tackle issues faced globally into the future.

The scientific team included a group of early career researchers whose outreach campaign, including social media posts, short videos and blog posts, has engaged audiences across Europe and beyond.  Their Twitter posts had 100,000 engagements during the cruise, and featured a Lego scientist photo series which proved particularly popular.  The team engaged directly with schools in Detroit, Dublin and Birmingham via a Q&A series.  Short videos documenting the expedition were posted to the University of Birmingham’s pre-existing audience, reaching several thousand.   The team will continue their outreach activities post-cruise.  Over the summer, PORO-CLIM will feature in iCRAGorama podcasts of the Irish Centre of Research for Applied Geosciences, the Girls into Geoscience (GiG) online conference and blog, and the European Geoscience Union (EGU) blogs, and teaching materials based on our new data will be developed.  All this material can be accessed via the expedition website at www.poro-clim.org.

PORO-CLIM is an international interdisciplinary research programme designed to carry out a marine geophysical survey of the POrcupine and ROckall continental margins in order to investigate causes of past CLIMate change.  The project Principal Investigator is Dr Stephen M Jones (University of Birmingham, UK) and the Co-Investigators are Dr Brian O’Reilly (Dublin Institute of Advanced Studies, Ireland) and Dr John R Hopper (Geological Survey of Denmark and Greenland).  The expedition website is www.poro-clim.org.

EuroFleets+ is “an alliance of European marine research infrastructure to meet the evolving needs of the research and industrial communities.”  The project facilitates open free-of-charge access to an integrated and advanced research vessel fleet of 27 state-of-the-art research vessels from European and international partners.  Through competitive calls, researchers can access the entire North Atlantic, Mediterranean, Black Sea, North Sea, Baltic Sea, Pacific Southern Ocean and Ross Sea. Building on the achievements of the two preceding Eurofleets projects, the Marine Institute are coordinators of EurofleetsPlus, which includes a consortium of 42 marine institutes, universities, foundations and SMEs from 24 countries across Europe, North America and Oceania, with funding of €9.9 million. www.eurofleets.eu